This is my review of Masha Tupitsyn’s Love Dog for Pop Matters.

There’s a passage that brought on a feeling of instant recognition:

In the opening scene of Days of Being Wild:

He comes in for the third time, after he’s told her that she will see him in her dreams, and asks her why her ears are red? I think: why is this whole movie red? And green. Green tint­ed (made green) and truly green (the jungle, the trees). Green like Robert Bresson’s Lancelot du lac and Hitchcock’s Vertigo. Red like Marnie. But parts of Days of Being Wild are shot like The Third Man, only all the shadows on the narrow streets are green. Outside, the angles belong to that noir. It’s overwhelming to see these two colors together like this in one movie after ev­erything they have meant to me the past few months. Maybe always.

She’s embarrassed. Embarrassed because she is excited, so she can’t look at him. I like people, no love people, who take looking and being looked at this seriously.

Because 1) I love Days of Being Wild and 2) I too love people who take looking and being looked at this seriously. 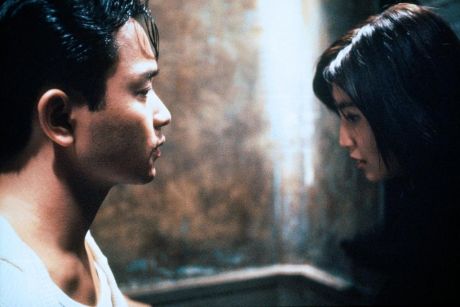 This leads me to think about that troubling passage in Marguerite Duras’s The Lover (translated by Barbara Bray):

Never a hello, a good evening, a happy New Year. Never a thank you. Never any talk. Never any need to talk. Everything always silent, distant. It’s a family of stone, petrified so deeply it’s impenetrable. Every day we try to kill one another, to kill. Not only do we not talk to one another, we don’t even look at one another. When you’re being looked at you can’t look. To look is to feel curious, to be interested, to lower yourself. No one you look at is worth it. Looking is always demeaning.

Something about how people are meant to look now, at themselves and each other, seems impoverished and demeaning, in a way. Now people are meant to glance at each other with speed and efficiency, and sum up, very quickly, whether they want to pursue the gaze or not. You are not even worth looking at in the mirror, sometimes. Or you must earn your own gaze, of yourself, by working hard to present a seamless, attractive self.

Nicholas Mirzoeff has written about looking and slavery, and Jonathan Beller on the labour of looking and how it is embedded in the history of racism and colonialism. So you can’t think about looking without thinking about power.

Sometimes you wish for the mutual look to be an equaliser but it never is.

I don’t know. Circling around the idea of looking, of how we’re trained to look, about what Mirzoeff says about it, that “the right to look is not about merely seeing”; where he thinks about “a time in which my claim to the right to look is met by your willingness to be seen”.

Like Nelson in Bluets, “I have been trying, for some time now, to find dignity in my loneliness. I have been finding this hard to do.”

Today, while out on the streets, I told myself not to fall into my habitual pose, which is to stare at the ground or at my feet or off into the distance, but to look at faces, to offer this silent gesture of something in what I think now was just an attempt to feel less alone while among so many people. But it’s hard(er) now to return the glance or to initiate one. The faces are opaque; or rather, faces have become obscure screens we can’t afford to waste eyeballs on.

Sometimes I wonder if I learned how to unlook in Winnipeg as a way to avoid the endless stares of a certain kind coupled with the amazing number of white dudes, bros, men, whatever who could never make eye contact but only dart glances your way when they think you’re not looking. (Which — when I sat down to analyse this with fellow not-white women in Canada, all from other countries, 100% of whom experienced the same — basically boiled down to endlessly complicated discussions about racism and fetishism of “the exotic”, discussions that were never resolved, of course not, how could they ever be.)

Also, the ever present threat of misogyny that makes looking such a fraught affair for a woman who just wants to claim her right to look.

You are currently reading Love Dog, and looking at The Blog of Disquiet.