Blink and you still won’t miss it

Our Prime Minister warns us not to stage an Egypt-style revolution in this blessed country. We should, presumably, concentrate more on making more cars, driving more cars, polluting our cities, increasing income disparity, and mindlessly zombie-shopping in malls. In the meantime we take the occassional break to ruminate on The State of the Country Today and blame all of our social ills – from petty theft to baby snatching and baby dumping and incest and rape and sexual harassment and murder – on those damned foreigners. Not all foreigners, though, the clean-looking ones with shiny blonde hair are definitely okay.

In the meantime, he also tells us that the act of “saving” Malaysian students in Egypt was not a political move:

“The Government decided that whatever the circumstances, we would launch a mission to rescue all Malaysians there.

“There was no political interest, as long as they were our people, our mission was to save them.”

Instead, Malaysians reading the local papers were treated to a stern warning from our Papa PM – “Don’t think that what is happening there must also happen in Malaysia. We will not allow it to happen here,” he tells us – a metaphorical slap on the wrist, as it were, and then soothed with some sugary treats, as below: 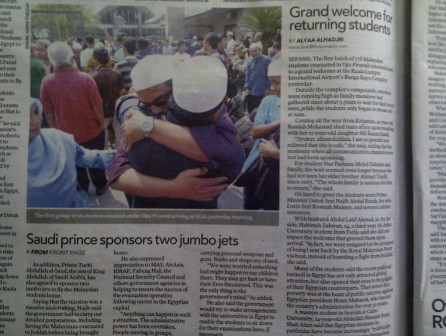 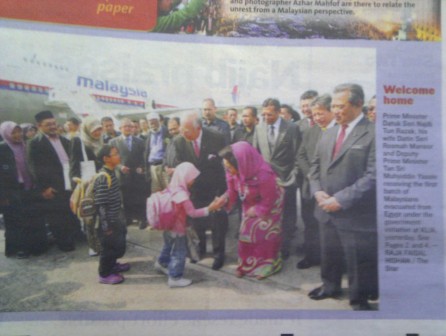 The Saudi Arabian government has granted unlimited flight access to Malaysia to airlift its citizens from Egypt to Jeddah – a rare move made possible due to the close personal relationship between Prime Minister Datuk Seri Najib Tun Razak and his wife Datin Seri Rosmah Mansor with the Saudi Royal House.

Ordinary Malaysians can feel heartened that our country has ties to a repressive, bling-bling regime. They grant us flight access! Unlimited! To save ourselves from those marauding Egyptians!

Many thanks to profit-starved MAS and profit-bloated Air Asia as they weasel their way in to participate in the spectacle; bless ’em, can’t live without ’em.

You are currently reading Blink and you still won’t miss it at The Blog of Disquiet.